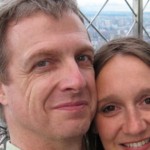 SALT LAKE CITY — Four years ago I called my best friend, Michael. We’ve known each other since grade school and made a point to catch up at least once a month. When I asked how he was doing, he said “Same (stuff), different day.” He was at work. He told me about how he and his girlfriend, Janet, had gone out to dinner and thought how she might be “the one.”

Less than a month later he told me that he had been told that the valve in his artificial heart was failing and he was going to have open-heart surgery in less than 24 hours. He had been advised to get his affairs in order. He was nervous. It turns out he had good reason to be.

The operation itself was a success, but he had a small stroke during the 11-hour surgery. This interfered with his memory, fine-motor skills and his ability to move his eyes properly. Recovery was rough. He had a breathing tube down his throat for a month. This ultimately damaged his vocal cords, and he later developed problems swallowing as well. During the three months in recovery he went from 170 pounds to 122. He was 5-foot-10.

Though being grateful comes naturally to me, I realized in watching Michael struggle with his recovery that there were several things I had previously taken for granted. The little things we take for granted could have a profound impact on our lives if we suddenly lost them. Here are six such things and the impact they made on one man. 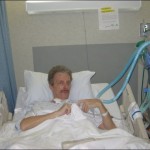 While I have often complained about my own lapses in memory, watching Michael struggle to remember anything that had happened in the days, weeks and months before his surgery was quite painful. At times he asked why his father had not come to visit him. We didn’t have the heart to tell him his father had died years before. He forgot friends had come to visit before they had left the building. He forgot his girlfriend’s name, though she sat with him night and day for months. While his memory has improved over the last (nearly) four years, he was recently given tickets to see the Rolling Stones. They had great seats. The following day, this amazing memory had vanished like it had never happened.

Fine-motor skills
Imagine how difficult life would be without the ability to perform fine-motor skills. Simple things like typing, dialing a phone, or pushing buttons on a remote control become exercises in frustration for Michael. I know that when I receive a “How are you doing, buddy?” text from him, I appreciate it greatly. That short sentence probably took him 30-45 minutes to write. Might your job require some degree of fine-motor skills? Would you be allowed to keep your job if you could not perform those tasks? Between the memory and fine-motor skills issues, Michael was not able to keep his.

Eye movement
The stroke robbed Michael of the ability to move his eyes in any given direction upon command. As you might imagine, driving became completely out of the question. Life becomes very different when you cannot drive. Michael sold his beloved motorcycle to stay financially afloat. To read the liner notes on the back of a CD required him to move the CD back and forth horizontally with his hands rather than moving his eyes back and forth. To take a photo with my best friend of over 35 years we waited several minutes for him to open and close his eyes several times and use the exercises taught him by his doctors to get a photo with him looking straight at the camera.

Ability to swallow
The muscles in Michael’s throat were compromised during his recovery. As a result, the swallowing mechanism in his throat was not working properly. When he would swallow liquids, the fluid went into his lungs, putting him at risk for pneumonia. Michael had to drink everything with a thickener that gave everything the consistency of runny oatmeal. In recovery I told him if he had to drink it, I would drink it with him. I nearly vomited. Almost four years later, Michael must be very, very careful when drinking and eating. He cannot have dinner conversation, and telling a joke while he is eating might result in his death. His girlfriend was so concerned about this issue, she nearly gave back the donated tickets for Michael to attend his 30th class reunion. He was only able to go by eating before the reunion. 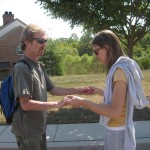 Most people complain that they have difficulty losing weight. Michael has the opposite problem. Though he has gained some of his weight back, he still looks like a skeleton. He exercises and eats as much and as fast as he can, but he has not been able to gain enough weight to properly support his body. Even if it is a few short steps, Michael must walk with assistance. When I took he and his girlfriend to dinner recently at their favorite restaurant, Michael tried his best to keep his dignity as Janet guided him by his hips and verbally coached him through the crowd.

Ability to communicate
Michael’s inability to communicate has hit me the hardest. It is a special torture to sit with him and not understand what he is saying. Having the breathing tube in for so long turned his voice into a series of grunts. Even his caregiver and significant other can only make out about 30 percent of what he is saying. He cannot use sign language because he does not have the motor skills to perform it, even if he could remember what he learned. Typing and texting are painfully slow. He does have an iPad that was donated to him on which he can choose from a series of short sentences, including “Yes,” “No” and “Thanks for coming to support me.” I lost my ability to speak once. I resorted to chatting online to feed my need for connection. I felt lonely and frustrated. It lasted for one day. Michael has been like this for nearly four years.

I tell you this story not to make you sad, but in hopes of making you happy and grateful. It is easy to take the little things for granted. If you were suddenly robbed of any one of these abilities, your life would probably be drastically different.

Please pause today to reflect. Spend a couple of minutes contemplating each of these abilities and how your life would be different.

So, how are you doing? Same stuff, different day? What “stuff” might you be taking for granted?

Pause. Reflect. Enjoy. If not for yourself, do it for Michael.